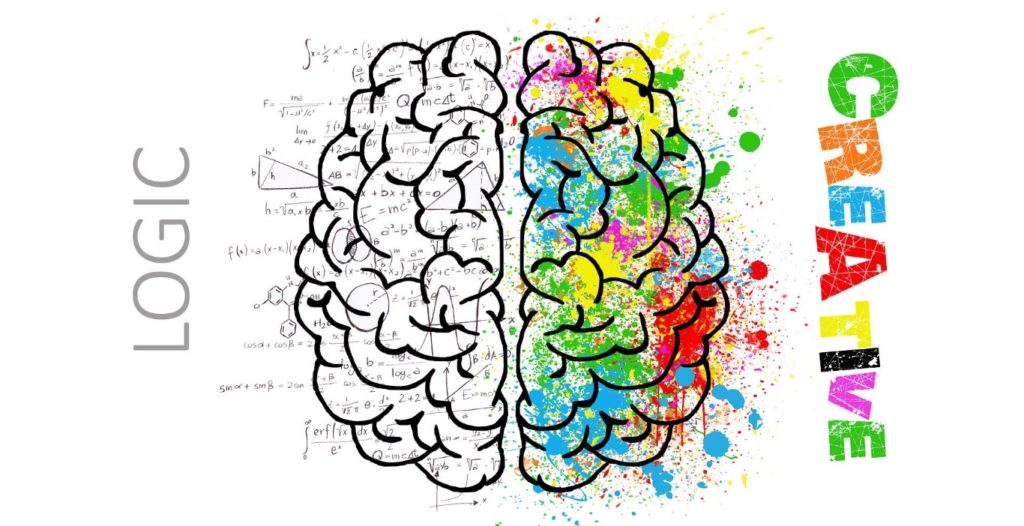 Experiencing, feeling, thinking, moving, acting; our brain controls all of this. But what is it actually, the brain, the organ that is responsible for so many things in life? It consists of many different parts, all of which have a certain function, or function in combination with other structures. Some important structures are on the surface of the brain, the cortex or cerebral cortex, and some are underneath, inside, so to speak. The cerebral cortex appears folded, which makes the actual surface area much larger than it appears. The depressions are called sulci, the elevations are called gyri. The cortex can be divided into four large functionally different areas. The area behind the forehead is called the frontal cortex and extends approximately to the middle of the brain. Behind it is the parietal cortex, which meets the occipital cortex at the back of the head. Below the frontal and parietal cortex lies the temporal cortex, starting at the temples. Most of the structures of the brain are doubled, namely on the left and right hemisphere, separated by the fissure longitudinalis cerebri. Some areas are more clearly assigned functions than others. Very well researched is the occipital cortex, which is responsible for visual perception, i.e. seeing. Between the frontal and parietal cortex is the sulcus centralis (central furrow). In front of the central sulcus is the area responsible for motor functions, behind it is the somatosensory cortex, responsible for haptic perception of environmental stimuli or self-perception, as well as other sensory information. For a more detailed description of the cerebral cortex, the division into Brodmann areas can be used, which divides the cortex into 52 areas and further subareas. In addition to the cerebrum, there is also a cerebellum, which, according to its name, is much smaller than the cerebrum, but in return has a much higher cell density. It is responsible for the fine tuning of motor functions, but is also involved in several cognitive processes. The interior of the brain can also be subdivided into numerous different units that have different functions. For example, the processing of emotions takes place at different locations inside the brain. A particularly important structure is also the brain stem, which is responsible for vital functions such as breathing, reflexes and control of the blood circulation. Although there are many anatomically and functionally different structures of the brain, it can be imagined as a huge network, in which all parts are connected to each other and mostly work in conjunction with each other.

Some insights into the localization of functions have been gained from injuries to the brain in individual cases. One such case is the injury of Phineas Gage. In an explosion in 1848, a 3cm diameter metal rod shot through his face, frontal cortex and skull, damaging the brain. He survived this accident, did not even faint and was able to walk and talk immediately afterwards, his intelligence and memory did not suffer either. In the long term, however, there was an effect of his accident. His personality had changed. He became an unreliable, moody and disrespectful person. Friends and family reported a complete change of character. As a result of this case, it is now known that abilities to follow rules, execute action plans and impulsiveness are located in the frontal brain. Through the case of another patient, it has been established that the formation of long-term memories requires a structure below the cortex, inside the brain: the hippocampus. Where the memories made are stored, however, cannot be answered so easily. Patients with speech disorders gave evidence that speech does not only take place at one place in the brain, but that sentence structure and grammar are processed at a different place than the semantic meaning of words.

So much for where what happens in the brain. But what is the brain actually? Together with the spinal cord it forms the central nervous system (CNS) and therefore consists mainly of nerve tissue. The cerebral cortex consists of nerve cells whose nerve fibres reach into the interior of the brain and connect them with nerve cells located there. A section through the brain shows that the nerve cells appear grey, while the nerve fibres, wrapped in myelin, are white. Therefore, a distinction is made between grey and white matter. Information is transmitted between the nerve cells via electrical impulses. This activity of the superficial nerve cells can be measured in vivo using electroencephalography (EEG).

Countless functions of our brain, their localization and the interaction of different structures have not yet been sufficiently researched. Therefore, even today there are still new and exciting insights that affect our brain. Finally, the philosophical question must also be asked whether our brain is complex enough to ever fully understand its own complexity.

PrevPrevious Burnout – Too much in my mind
NextThe Neurofeedback Training MethodNext